Tranquil Garden's FREE Demo is OUT NOW and we're working on the Steam Release! 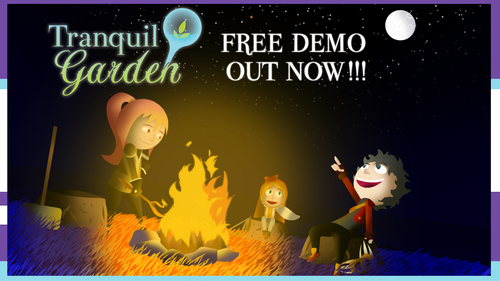 Hello, everyone! It's been just a couple of weeks since Tranquil Garden launched on GameJolt and Itch and the reception so far has been amazing. We've put a lot of love and care into making the game feel accessible and polished for people with varying amounts of experience in playing RPGs. From having developed the main game in an engaging engine such as RPG Maker MV to having worked on a mobile tie-in for it featuring cheat codes/secrets, we feel that the overall Tranquil Garden experience is definitely a worthwhile one.

And that's why we're overjoyed to bring up that we've gotten a concise yet polished Demo Version of Tranquil Garden currently out for FREE DOWNLOAD on GameJolt, our Website, and even here on Itch! It features both the relaxed, exploration-based Town Gameplay and the strategic, turn-based Battle Gameplay that quite a few Players have already been significantly enjoying.

Give it a try and let us know what you think anywhere on our socials or even via Email (GlassRobotGames@Gmail.com), and you could score the Steam Version of Tranquil Garden FOR FREE!

Speaking of that Steam Version... More or less, we're working on it! We've been taking everybody's feedback into consideration so far, polishing the game and fixing some more minor bugs, and we're also working on getting the MacOS Build FINALLY ready. We'll have more of an update on this in the near future, so stay tuned for now!

Welcome to an accessible RPG adventure to save the world unique to your own specific playstyle!